The Executive Council, comprised of FRGS officers, is charged with managing the business of the society and developing its policies. 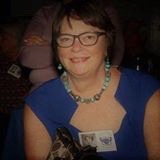 Trish grew up in New Jersey and moved to Virginia to attend Mary Washington College. After graduation, she earned a Masters in Librarianship from Western Michigan University and later a Master in Humanities from the University of Richmond. Trish worked for years as a school librarian and then worked for the Library of Virginia in the pre-computer days when typing was the desired input method and research meant either microfilm or traveling to the source. The job at the Library of Virginia is responsible for her obsession with research, especially for local history and genealogy. Eventually, Trish moved back to New Jersey and worked for Bell Labs Library group. Trish later worked for the Portsmouth Public Library and after retiring in 2017, she moved to the Fredericksburg area. Her love of genealogy and local history groups (especially Irish history) remains very strong.

Like many of you, Trish didn’t know much about her ancestors. She knew that her Grandmother May Agnes Walters and her father Joseph Warren Walters were born in Virginia. The rest of Trish’s family comes from Pennsylvania, New York, New Jersey, Cornwall, England, and Ireland. She began research in Ireland and was able to obtain her Irish citizenship because William Little, her grandfather, was born there. This research has led her to want to share this love of Ireland and Irish genealogy.

Trish now lives in Ruther Glen with her dog Meeka and cat Bouncy.

Bob Epp. In this role, Bob has the important job of Program Chair, being responsible for securing speakers for both the monthly meetings and the Annual Fall Conference. The First Vice President also performs the duties of the President in the absence of or at the request of the President.

A note from Bob: I was always curious about my surname. Upon further investigation, I found it is a pet name for the Germanic surname of Eberhardt. I had the opportunity to professionally relocate to Heidelberg in 1976. Once there, I researched all three of my German family lines, as well as my Norwegian family. Subsequently, I continued my research in cooperation with my cousin Barbe. Our immediate Epp family was based in West Y Central Wisconsin. We have also located several other Epp lines in the U.S. and Canada, also directly descended from the Epp line present in North Baden since the 17th Century. I also research family lines in Northwest Spotsylvania and Eastern Orange Counties of Virginia.

This position is the Society’s official Registrar, whose duties include maintaining the membership directory of the Society. The position includes the job of Membership Chair.

This position is currently unfilled. 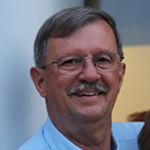 Tom Linthicum.  Tom is responsible for FRGS finances, including developing and managing current accounts, the annual budget, and tracking and reporting on the society’s financial position.

A note from Tom: I grew up in Germantown, Maryland within miles of the graves and former homes of generations of my ancestors.  I heard stories about many of them when I was young, some true, and some were old stories that took me on a few wrong turns.  Numerous sources and records have emerged over the years, as well as appreciated research efforts of many cousins.  Technology resources took a leap in the ’90s with a program called Family Tree Maker and a supporting disc with a large database going back 15 generations on my father’s side.  It was fascinating to find family who farmed the land where BWI now stands, and members of the Maryland Militia in 1776.  This database has been the subject of much validation research over the years, including through sources in Virginia.  Current DNA analysis has resulted in further validation of previous records.  As an amateur photographer, I have spent time taking pictures of family gravesites and contributing to the “Find-A-Grave” database.  FRGS has provided clear direction on many of the new and older reliable sources for continuing the investigation.

The secretary is responsible for keeping the minutes of the FRGS regular monthly meetings, special meetings, and Executive Council meetings.

This position is currently unfilled.

All meetings are suspended until further notice. We will update the website and our Facebook page when we are able to resume meetings.

FRGS meets at the Salem Church Branch of the Central Rappahannock Regional Library, 2607 Salem Church Rd., Fredericksburg, VA 22407, at 7:00 p.m. on the second Wednesday of the month (except Jul/Aug/Dec). The public is welcome to attend.

FRGS is a Member of: